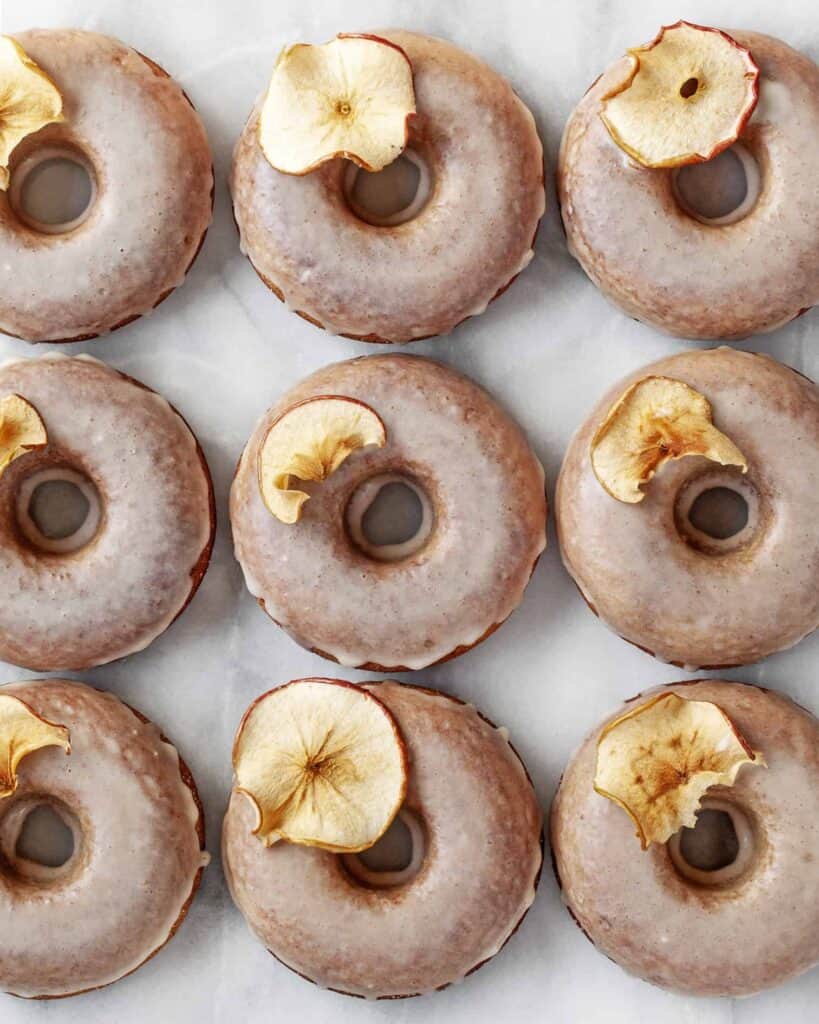 From the applesauce in the batter to apple chips decorating the tops, these baked apple cinnamon donuts are full of flavor including maple syrup in the glaze.
Jump to Recipe

From the applesauce in the batter to apple chips decorating the tops, these baked apple cinnamon donuts are full of flavor including maple syrup in the glaze.

Time is running out, and we haven’t been apple picking yet this fall. I absolutely love apples and follow the old rule of eating an apple a day.

My go-to afternoon snack is an apple with a big scoop of peanut butter.

But the real reason I like to head to an apple orchard, besides escaping the city, is for the warm, freshly fried apple donuts, and I don’t even think of myself as a donut person.

You can’t resist fueling up on these donuts while you’re apple picking.

Their scent is magical, and it’s impossible to just eat one.

I don’t mind when my clothes still smell like those cider donuts even by the time we’ve finally made it home.

Hoping to recreate that aroma, I made a batch of baked apple cinnamon donuts. And it worked!

I took a slow and deep inhale, and I thought I was in the autumn of my dreams.

How To Make Apple Cinnamon Donuts

I made a basic vanilla donut batter except I folded in applesauce.

The more apple the better, right? After they finished baking, I tossed the donuts in cinnamon sugar while they were still nice and warm.

As they were cooling, I started working on decorations.

I sliced an apple as thinly as possible and arranged the rings on a sheet pan lined with parchment paper.

I baked the apples until they were dry and crisp.

Then I whisked together the maple-syrup-spiked glaze.

One by one, I dunked each donut into the glaze and placed an apple chip on top.

Waiting for the glaze to set was agonizing since I felt like I was being teased by their smell.

From the applesauce in the batter to apple chips decorating the tops, these baked apple cinnamon donuts are full of flavor including maple syrup in the glaze.