I’m always looking for an excuse to put bread in my salads. Not as a dinner roll teetering on the side of my bowl, but actually in the salad.

Greens are my thing. I love a huge plate of vegetables for a meal on their own.

Last week I forgot to pack vinaigrette in my lunch bag for work. I ended up eating a kale salad undressed. I still enjoyed it! No need to disguise that kale.

Croutons are one of those ingredients that get accused of ruining the nutritional value of a salad, but I think they transform salads into filling meals.

It’s just a matter of balance. If you’re looking for more bread than leafy greens, pick a panzanella. I have version of this classic salad for every season: roasted root veggies for fall and plenty of tomatoes for summer.

Looking for something with more leaves than bread, I made a Lebanese fattoush salad.

The bread in fattoush is pita. Feeling like a major over achiever, I made my pita from scratch. I have yet to find store-bought pita bread that tastes good and not like cardboard.

Homemade pita is actually very simple to make! It’s not necessary, but it’s totally worth it. Seriously, it will blow your mind.

How To Make A Fattoush Salad

I tore a few of those pita rounds into rough pieces. Then I drizzled them with olive oil and sprinkled on sumac.

Sumac is a Middle Eastern spice that is bright and a bit tart with a deep red color.

Bread is not something that lingers at my house, so I like to toast whatever bread I’m using in a salad because it handles the dressing better.

For greens, I chopped romaine and folded in parsley and plenty of fresh mint for wonderful, strong herby flavor.

There are lots of variations for fattoush. Cucumbers and tomatoes are pretty much a requirement. I also tossed in radishes for even more crunch.

To bring everything together, I made lemon vinaigrette with sumac and minced garlic.

Before I served the fattoush salad, I dusted it with more sumac. It might be my new favorite spice. 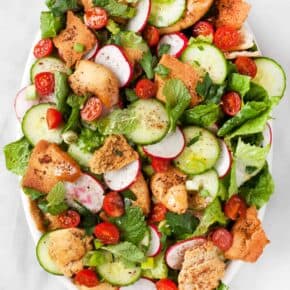