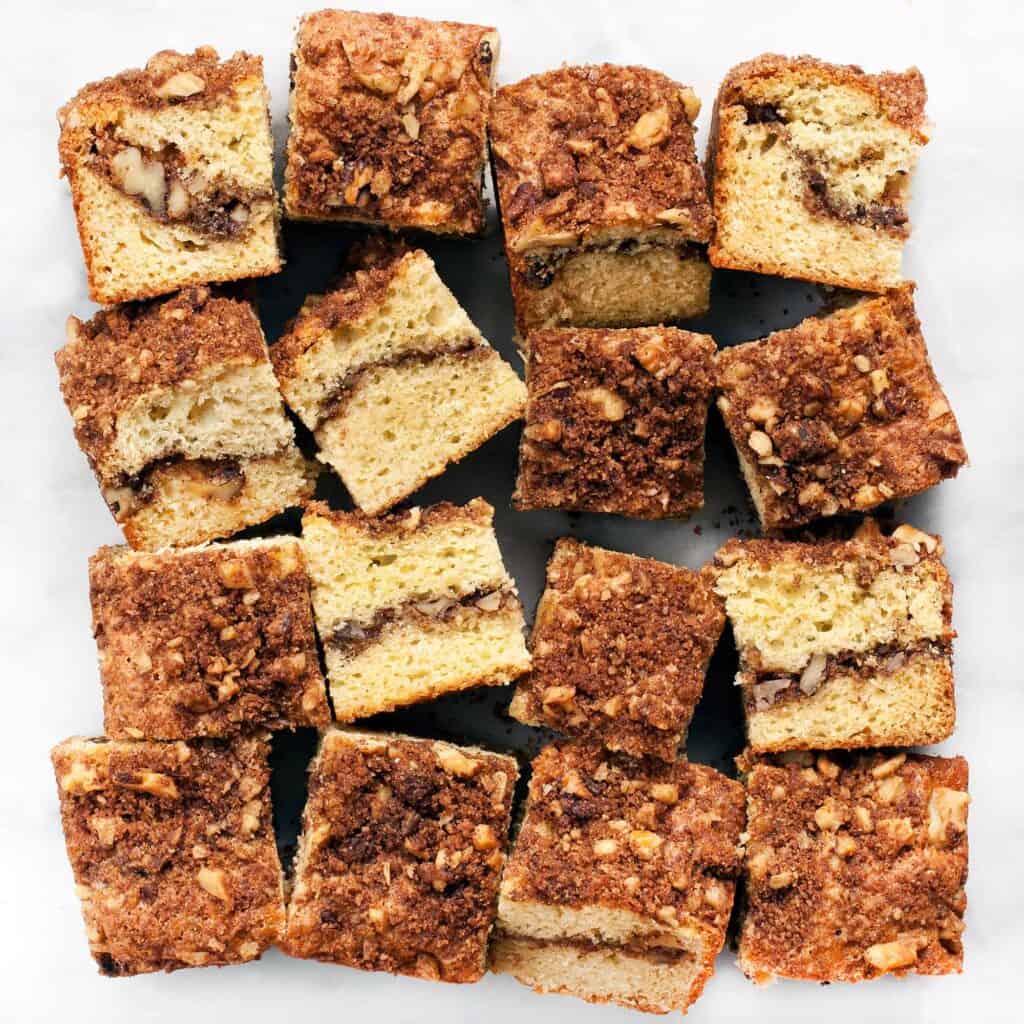 With a nutty cinnamon crumble on top and hidden in the middle of the cake, this cinnamon coffee cake is a sweet breakfast or brunch treat.
Jump to Recipe

With a nutty cinnamon crumble on top and hidden in the middle of the cake, this cinnamon coffee cake is a sweet breakfast or brunch treat.

My grandmother was not much of a cook.

Unlike many women of her generation, her primary interest was the family business rather than household tasks.

Despite her limited kitchen time, my grandmother had a few specialties.

One of them was her sour cream coffee cake with its addictive cinnamon nut topping.

My grandparents were breakfast experts whether my grandfather’s waffles or my grandmother’s coffee cake.

What I looked forward to most when visiting was the smell of coffee and the noise of the juicer signaling that a.m. meal.

Those mornings made me love breakfast so much that I occasionally indulge in breakfast for dinner.

The recipe for my grandmother’s cinnamon coffee cake is preserved on a smudged sheet of paper with “GOOD LUCK” as the final instruction typed in all caps.

My mom altered the original by swapping the sour cream for Greek yogurt, an ingredient both of us usually have in the fridge.

My grandmother would be delighted that her recipe continues to be in demand and part of the repertoire of my mom, me and I hope another generation.

How To Make Cinnamon Coffee Cake

First, I preheat the oven to 350 degrees F and grease an 8-inch square baking pan with butter.

Next, I make the topping. This might be my favorite step because it is so fragrant. I am always reminded how much I adore cinnamon baked goods.

In a small bowl, I stir together a cup of chopped walnuts or pecans, light brown sugar, cinnamon, a couple tablespoons of flour and a little melted butter.

After that, it’s on to the cake. In a medium bowl, I mix together the flour, baking powder, baking soda and salt.

Then in a large bowl I use an electric mixer to cream the butter and sugar. Once it’s light and fluffy, I beat in the eggs one at a time and the vanilla extract.

With a wooden spoon, I fold in the Greek yogurt and the dry ingredients.

I spread half the batter into the bottom of the prepared pan. Next, I sprinkle on half the cinnamon nut mixture. Then I spread the rest of the batter on top and finish the cake with the remaining topping.

You can serve the cinnamon coffee cake warm or at room temperature.

With a nutty cinnamon crumble on top and hidden in the middle of the cake, this cinnamon coffee cake is a sweet breakfast or brunch treat.