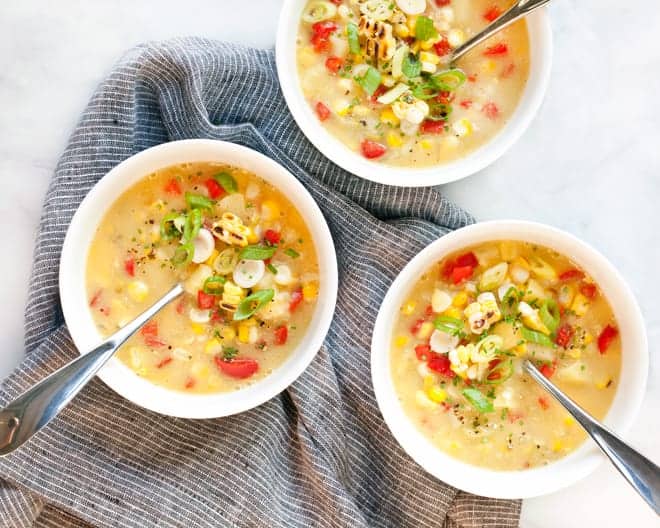 It took me extra time at the corn bin at the farmers market yesterday.

When you’re at the end of the season, unfortunately, the likelihood of getting a less than perfect ear is far greater.

Even after just a week goes by, the quality of the selection goes downhill fast.

I do everything I can to look for the tightest husks because then they have been more protected from the air and worms that will go to town feasting on those kernels.

The last thing I want to do is peel back the husks to peak at the top of what’s inside.

Then you have exposed the corn to air, so it can dry out.

This late in the season it seems like the there is some sort of defect in pretty much every cob. You can’t be picky! Just accept it and don’t be disappointed.

I bought some even though it wasn’t in the greatest condition.

After devouring corn on the cob for the last couple months, it was time to get every last bit out of it and make grilled corn soup.

Why not make the most of what I had?

How To Make Grilled Corn Chowder

First, I fired up the grill.

I grilled the ears of corn until they were lightly charred. Once they cooled a bit, I sliced off the kernels.

Instead of throwing away the empty cobs, I simmered them in water with a bay leaf to make a quick corn broth.

Then I pureed some of the corn with the broth in the blender and strained it.

Next, in a large saucepan, I sautéed leeks with peppers and potatoes. I added a little flour and poured in the corn broth, which helps thicken the soup.

After 15 minutes, the potatoes were tender and I was ready to serve the soup.

Finally, I topped each bowl with scallions and chives. 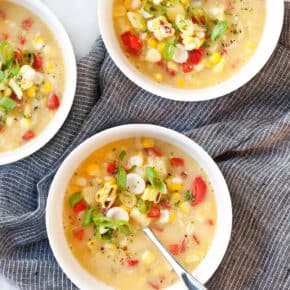