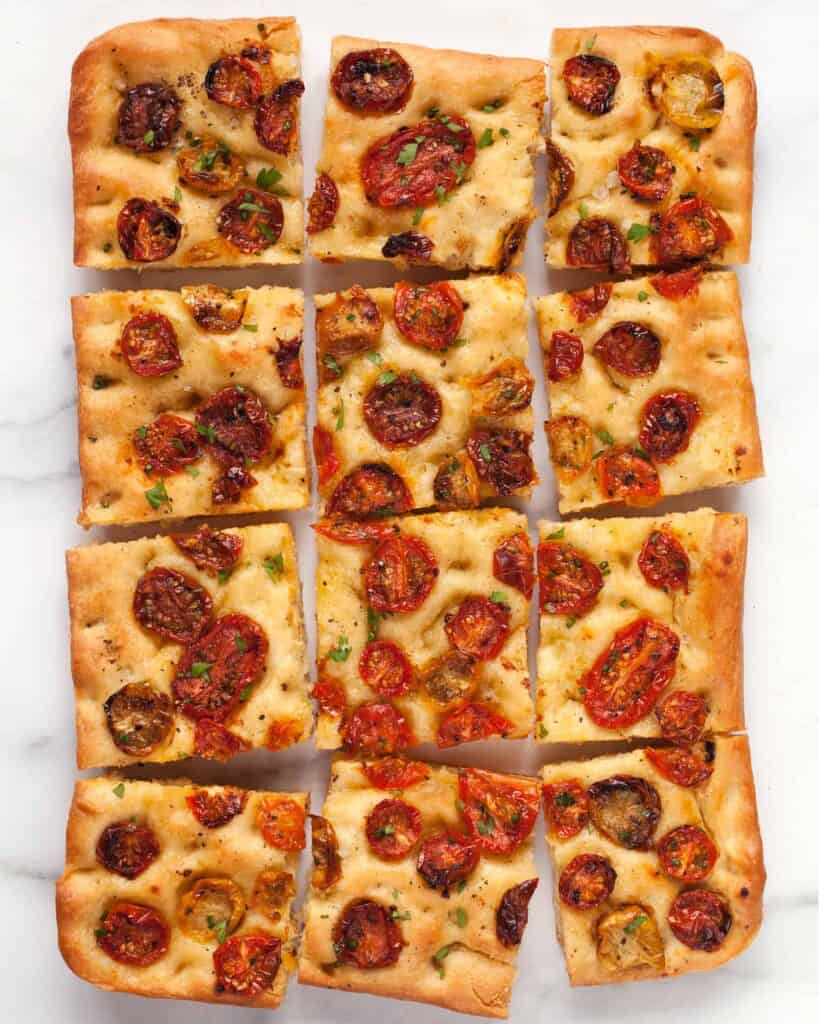 Pre-roasting the tomatoes in this roasted tomato focaccia guarantees they will be full of intense flavor. Serve it as a side or an appetizer.
Jump to Recipe

Pre-roasting the tomatoes in this roasted tomato focaccia guarantees they will be full of intense flavor. Serve it as a side or an appetizer.

I love baking bread, but I don’t claim to be an expert. Far from it.

There’s no sourdough starter in a jar in my fridge. I prefer simple crusty loaves of no-knead bread and knots in flavors like garlic, rosemary and everything.

If you’re new to bread, focaccia is a great place to start. It’s more forgiving.

There’s no pressure on kneading or shaping. The more lumpy and bumpy, the better.

Herbs are always a good idea and so is cheese and even fruit.

During the fall, I bake a blue cheese focaccia with pears and caramelized onions.

I was craving a summer version, so I baked roasted tomato focaccia.

How To Make Roasted Tomato Focaccia

Like any cooking/baking project, I began with the most time-consuming step, making the dough. It is a mixture of all-purpose flour, salt, yeast and of course olive oil, a must for focaccia.

It doesn’t take long to make the dough. Waiting for it to rise is the long part.

I knew pressing raw tomatoes on the top of the focaccia wouldn’t give them enough time to roast.

To play it safe, I took advantage of the oven temperature.

I preheated the oven to 400 degrees F and roasted sliced cherry and grape tomatoes. They were finished in just shy of 30-minutes.

After that I cranked up the oven to 450 degrees F in anticipation of baking the focaccia.

I stretched the dough into a 13” x 9” sheet pan. And gave it a little time for a quick second rise.

Then I called in for help.

My five-year-old loves focaccia, so I had him press his fingers into the top to create lots of dimples. Then I tucked in the tomatoes, cut side up.

It didn’t take long for the kitchen to fill with the most wonderful, welcoming aroma that is one of the joys of bread from scratch.

Fresh herbs are a good way to finish off focaccia, so I sprinkled on chopped parsley and chives on the warm loaf.

I am a big fan of this roasted tomato focaccia. You can’t go wrong with summer tomatoes and olive oil.

My son had other ideas and made me pick off the tomatoes. He just wanted it plain.

Pre-roasting the tomatoes in this roasted tomato focaccia guarantees they will be full of intense flavor. Serve it as a side or an appetizer.