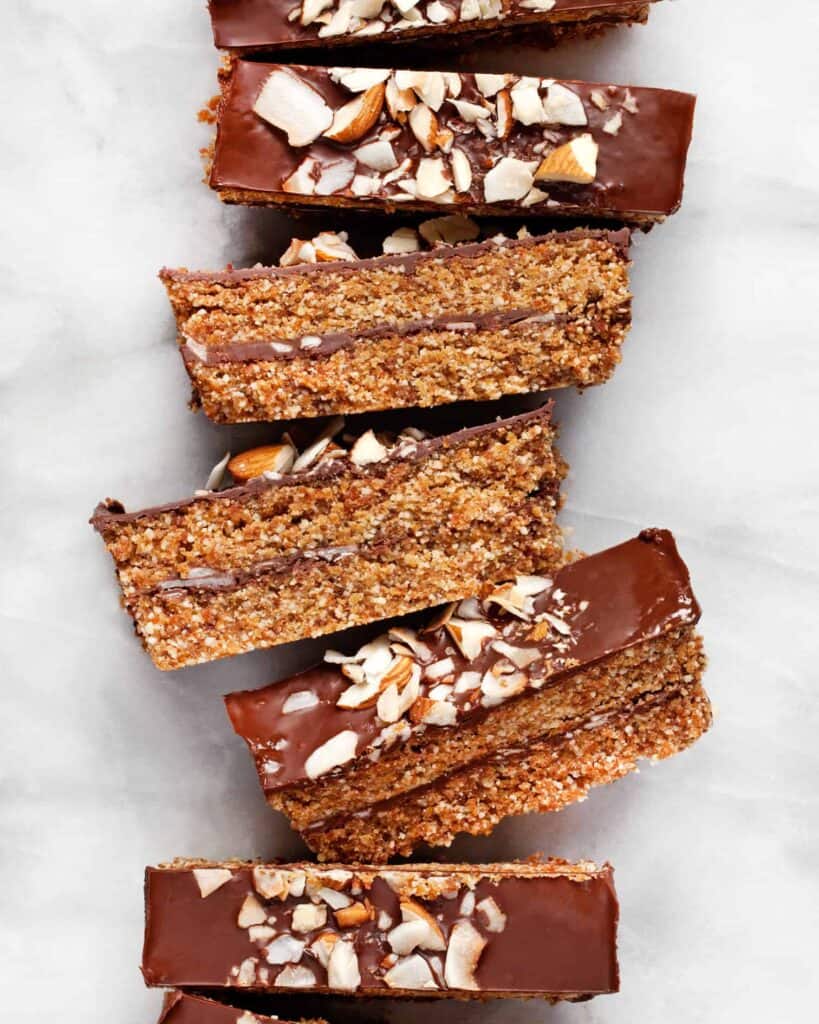 With dates and almond butter, these chocolate coconut almond bars are a lightened up version of Almond Joy bars with a layer of chocolate in the middle.
Jump to Recipe

With dates and almond butter, these chocolate coconut almond bars are a lightened up version of Almond Joy bars with a layer of chocolate in the middle.

I just polished off the last of the Halloween candy. Please don’t judge me.

It was tucked into one of the shelves in the freezer door. Having a mini candy bar is such a good dessert. With a little willpower, you can just have one and your post-dinner craving is satisfied.

I love the variety packs they make just for Halloween. We had less than a quarter of a bag left.

It was mostly Almond Joys. My husband isn’t a coconut fan, so it was up to me.

I used to say I didn’t like coconut either, and then I gave it another chance. Wow! Do I love coconut now!

Everything I used to say I didn’t care for, whether it was the texture or taste, is what has me so hooked.

I had never actually tried an Almond Joy.  After the first bite, I knew I would have no problem finishing them myself. It was even better that I didn’t have to share!

When they were gone, I still wanted more coconut, chocolate and almonds.

I wasn’t going to buy Almond Joy bars. Instead I made a from-scratch, lightened-up version.

First, I pulsed roughly chopped almonds and dates, almond butter, vanilla extract and salt in the food processor until it became close to a paste that would hold together.

Then I melted chocolate and coconut oil in the microwave.

To assemble, I pressed part of the nut-date mixture into the bottom of a loaf pan. I poured over half the chocolate and scattered on toasted unsweetened coconut flakes.

To make sure the chocolate layer stayed intact, I chilled the pan in the fridge. Once the chocolate had hardened, I pressed in the remaining nut-date mixture.

I spread more chocolate on top and sprinkled on coconut flakes, almonds and flaky sea salt.

Finally, the pan went into the fridge for its last chill.

Just like their frozen Almond Joy inspiration, I liked these chocolate coconut almond bars best served straight from the fridge.

With dates and almond butter, these chocolate coconut almond bars are a lightened up version of Almond Joy bars with a layer of chocolate in the middle.