Make baked kale barley risotto in the oven and you'll never stir risotto on the stove, the traditional way, ever again. Kale pesto gives this vegetarian recipe lots of flavor.
Jump to Recipe

Make baked kale barley risotto in the oven and you’ll never stir risotto on the stove, the traditional way, ever again. Kale pesto gives this vegetarian recipe lots of flavor.

Now that I’ve started baking risotto in the oven instead of cooking it in a pot on the stove, I don’t think I ever can go back.

Being able to skip all the stirring, makes risotto a dish I can turn out no matter the night of the week.

It’s not even the time that I mind so much when tackling risotto the traditional way.  It’s the fact that I can’t multi-task when I’m stuck stirring and letting the grains absorb the stock.

I felt inspired to go back to one my kale barley risotto recipe and update it to the oven method.

Risotto can be intimidating to cook. I find that baking it is easier and more foolproof.

I’ve been a quite a kale kick lately, especially in salads, it’s my green of choice.

I love how crisp and sturdy the leaves are.

How To Make Kale Pesto

For this baked kale barley risotto, I like including a lot of kale throughout the entire recipe.

That’s why I before I start heating the olive oil in the saucepan, I make a batch of kale pesto.

Folding pesto into grains is my go-to way of adding lots of flavor. This pesto is a mix of curly kale leaves, garlic, walnuts, Parmesan and olive oil.

With the pesto ready, I sauté roughly chopped white onions in the pot.

Then I add the barley followed by a splash of dry white wine.

It doesn’t take long for the grains to absorb the wine. After that, I stir in part of the kale pesto.

Next it’s time to pour in the veggie stock. When the mixture comes to a boil, the lid goes on the pot and then I carefully slide the whole thing into to the oven.

After about 30 minutes or so, most of the liquid has been absorbed and the grains are tender.

Not finished with kale, I spoon in the remaining kale pesto and throw in another couple cups of torn kale.The heat from the baked kale barley risotto lightly wilts the kale leaves.

I top each cozy bowl with shaved Parmesan and black pepper before serving.

Make baked kale barley risotto in the oven and you’ll never stir risotto on the stove, the traditional way, ever again. Kale pesto gives this vegetarian recipe lots of flavor. 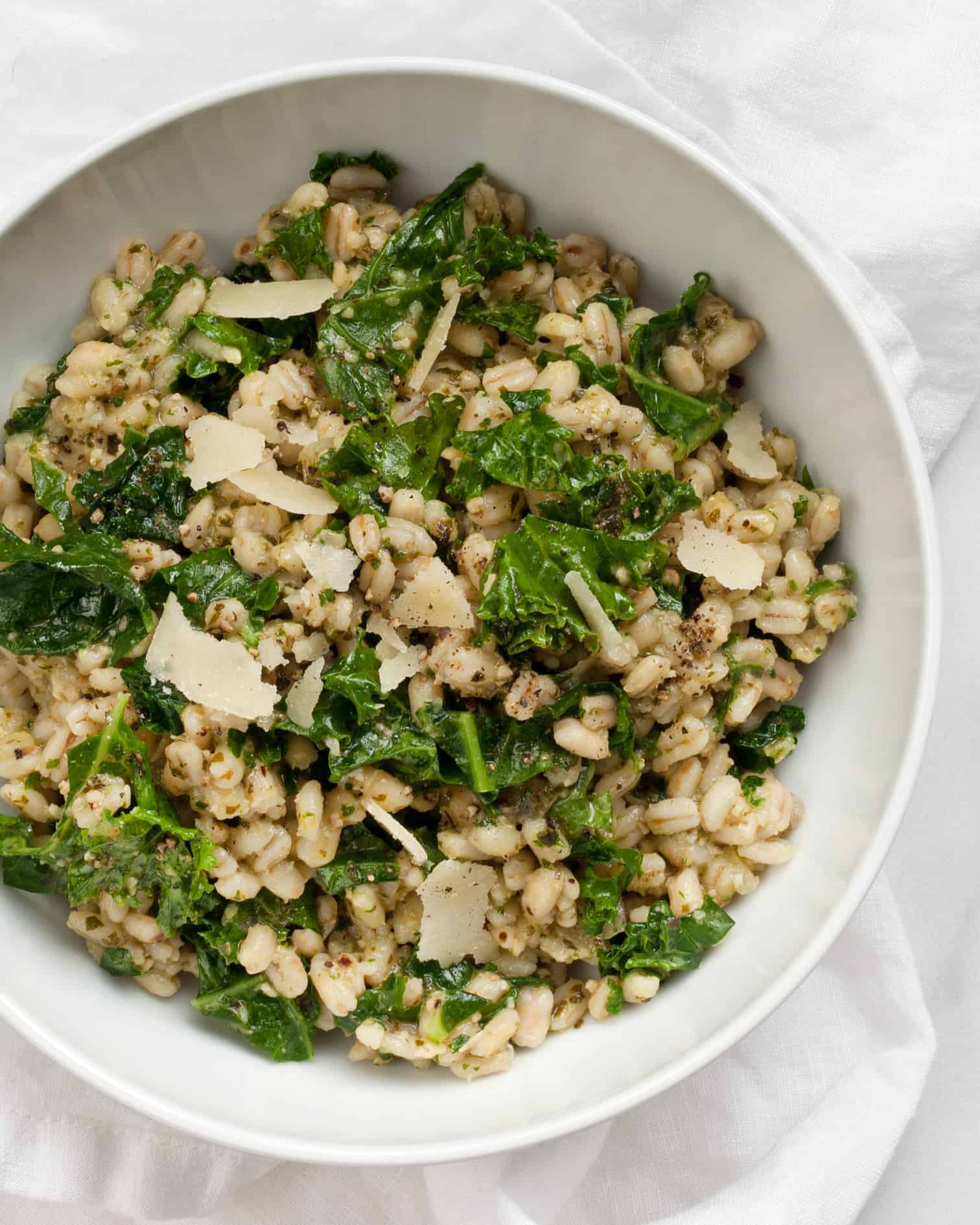