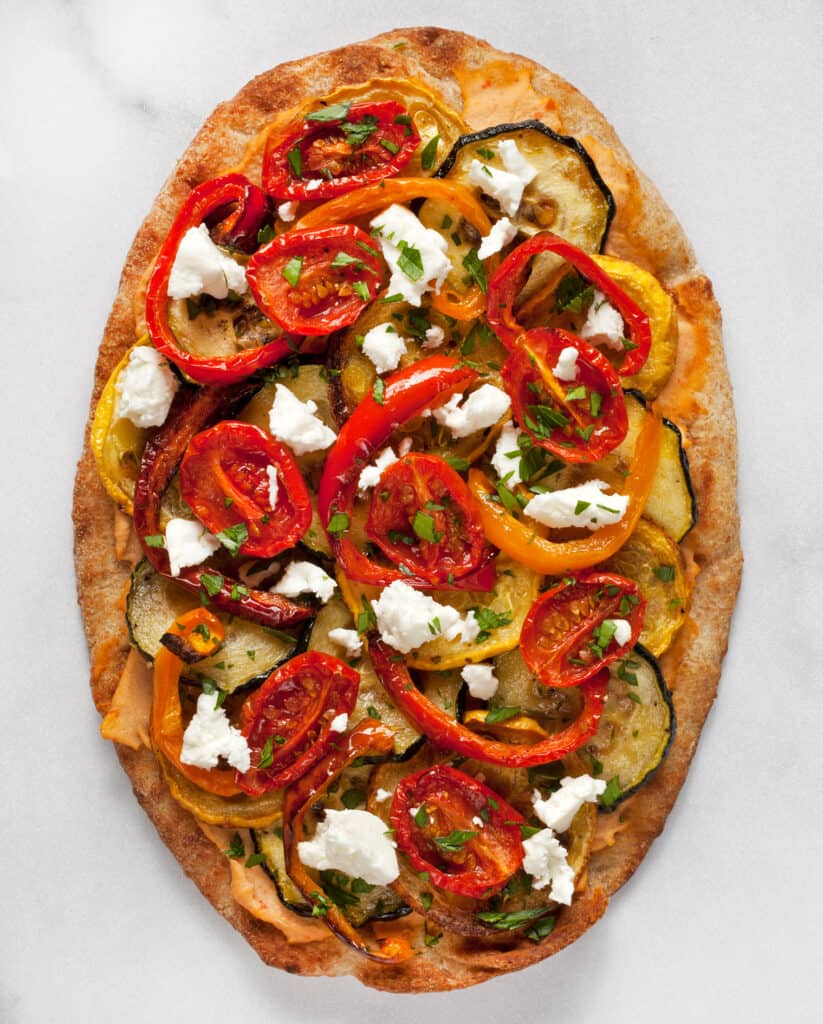 My fridge is never without hummus. And that isn’t just for dipping. Actually this amazing spread is great for pizza, more specifically naan flatbread with plenty of veggies.

So what’s the difference between pizza and flatbread? When I think of pizza, it involves dough with toppings and cheese that’s baked in the oven or even grilled. On the other hand, with a flatbread you start with the crust already baked, and then you top it, so it’s less about melted cheese and hiding the crust. And with the endless options of pre-made naan, pita and other flatbreads at the grocery, this is a recipe where the hard work is already done for you.

Why You Need This Recipe

It is uses store-bought ingredients. As much as I love making my own pizza dough, sometimes I want a shortcut. And that doesn’t mean ordering a pizza every time I don’t feel like cooking. Naan is perfect for crust especially when you have a lot of vegetables. Then cheese is just a finishing touch instead of melted all over the toppings.

There are a lot of vegetables.  You can really maximize your veggie intake and clear out what you have in your kitchen just by roasting a couple pans of zucchini, squash, tomatoes and peppers. A flatbread pizza is a great way to put them to use for a simple vegetarian meal.

Hummus is an easy way to customize it. There are times when I whip up a batch of homemade roasted garlic hummus. But three cheers for store-bought hummus because that’s often what ends up in my cart. You can use your favorite flavor and brand for your flatbread. Besides roasted garlic, I also am a big fan of spicy hummus for a touch of heat as well as roasted red pepper hummus.

Found in Southeast and Central Asia, naan is a traditional leavened flatbread that is made from whole wheat flour and all-purpose flour. The texture is best described as soft and fluffy. Naan often has milk or yogurt in the recipe, which makes it pillowy.

In India it is baked in a tandoor oven, which is made of clay. Before baking, naan bread is brushed with ghee. The heat causes it to puff up and bubbles appear all over.

Naan is wonderful with curry. Tear it and let it sop up sauces, soups and stews. Or use it for dips like homemade labneh. Naan is soft enough that it can also be a wrap.

At its most basic, this naan pizza is crust, hummus and veggies. No matter the season, if you have other vegetables to roast or leftover roasted ones, they would be great for toppings. For instance, try crispy roasted brussels sprouts and butternut squash in the fall and winter.

How To Make This Roasted Vegetable Naan Flatbread

Preheat the oven to 425 degrees F.

1. Toss the zucchini and squash with olive oil, salt and pepper on a baking sheet. Make sure they are in a single layer.

2. Toss the peppers and tomatoes with olive oil, salt and pepper on another pan. Spread them into a single layer with the tomatoes cut side up. If the tomatoes are flesh side down, then they are more likely to stick to the pan.

3. Roast the veggies until they are browned at the edges. This will take about 20-25 minutes.

4. Warm the naan in the oven. Place it right on the rack for 2 minutes on each side.

5. To assemble the pizza, spread the hummus on the naan. Leave a border around the edge that’s about 1 inch.

6. Top the flatbreads with the roasted zucchini, squash, peppers and tomatoes.

7. Sprinkle on crumbled feta and parsley.

These flatbreads are best eaten warm or at room temperature. You can slice them and serve them as an appetizer too. Or treat them like a vegetarian main dish. To go with it, I like an easy arugula salad with lemon vinaigrette.

If you have leftovers, you can eat them cold straight from the refrigerator, or rewarm the naan in a 350-degree F oven for 7-10 minutes.

Let me know if you if you made these flatbreads. Please leave a comment and rating below. Thanks!

You can eat leftovers cold or warm them in a 350-degree F oven for 7-10 minutes. 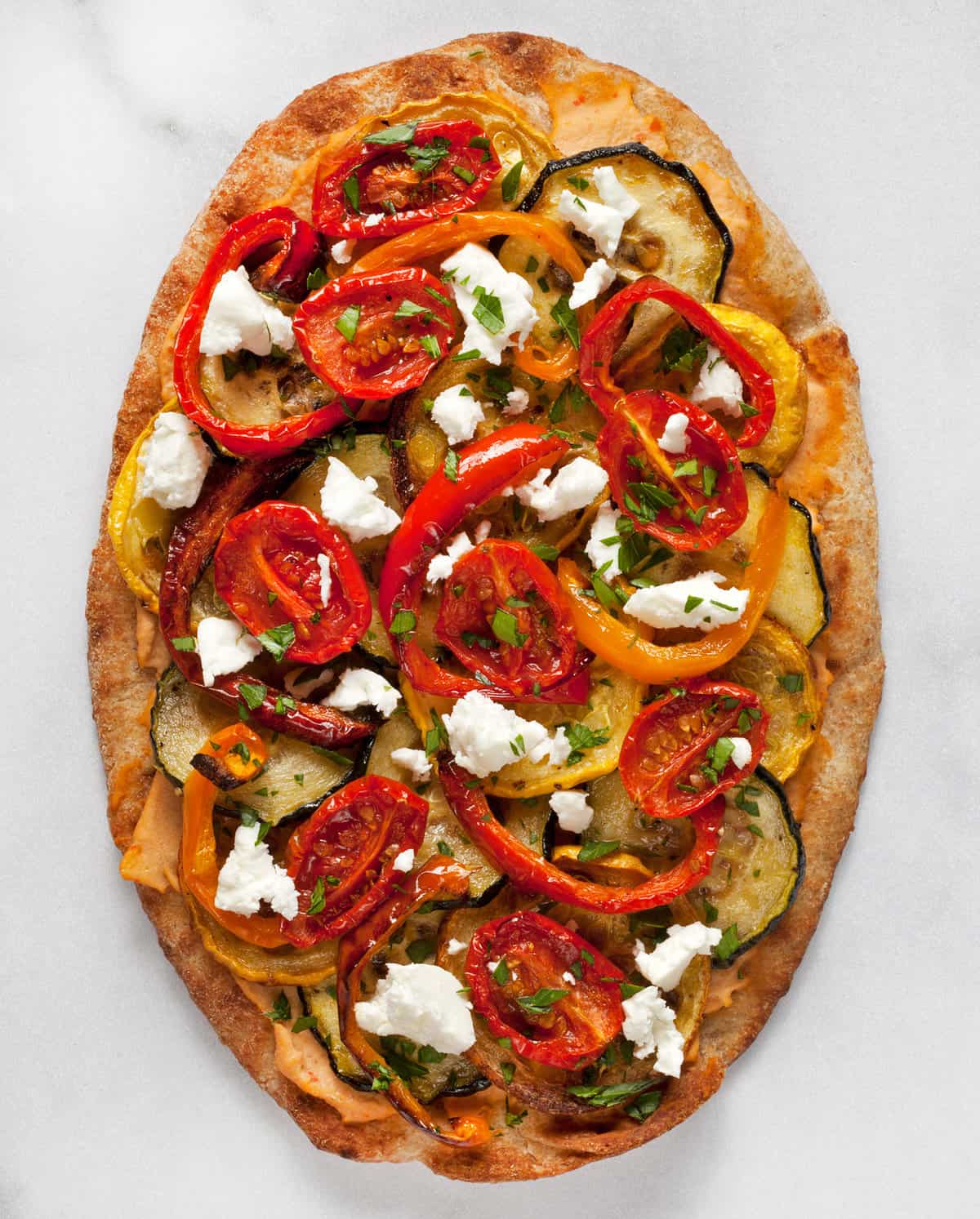