Instead of the usual cookies, these brioche ice cream sandwiches pair a store-bought brioche bun with a scoop of homemade toasted almond ice cream.
Jump to Recipe

Instead of the usual cookies, these brioche ice cream sandwiches pair a store-bought brioche bun with a scoop of homemade toasted almond ice cream.

There’s no mistaking that summer has already made its presence known even though the official first day isn’t here yet.

It’s hot! The change from long sleeves to no sleeves has been pretty abrupt.

One of my tactics to stay cool is to try to walk on the shady side of the street. The other is to consume more things that are very cold.

I can’t complain about fizzy drinks, iced chai lattes and of course, frozen treats for dessert.

My 7-year-old is a big fan of popsicles, but I love an ice cream sandwich.

Usually, I make a batch with cookies and stash them in the freezer cut into quarters, so they last longer. That’s if I have enough self-control not to devour more than 1 or 2 at once.

This craving me had me reminiscing about brioche ice cream sandwiches, an old blog recipe originally inspired by an afternoon during the years that my husband and I lived in London.

One of the things I miss most about living abroad is weekend exploring. That can be as spontaneous as taking the train or bus somewhere and getting off at a new stop.

That’s what led to the discovery of these ice cream sandwiches.

As my husband and strolled through the stylish streets of Marylebone, we came across a tiny, now-defunct Italian food shop with a fancy deli and imported goodies lining its curated shelves.

What caught our attention was a small case of homemade ice creams. When the owner behind the counter said he served them on brioche buns, we couldn’t refuse.

I’ll never forget how the buttery brioche absorbed the vanilla ice cream as it slowly melted. It was an absolute dream.

Going back to 2013 and the first year of Last Ingredient, I posted a recipe for brioche ice cream sandwiches completely from scratch, including the buns and the ice cream.

So now felt like the right time to update this recipe using store-bought brioche and homemade toasted almond ice cream.

By doing it this way, you can make the ice cream in advance, and then you can buy the brioche rolls at their peak freshness.

If you aren’t familiar with brioche, it falls in the category of enriched breads. The dough includes sugar, eggs, butter and milk.

Some examples of these fluffy, rich breads include challah, which is great for French toast, as well as babka and cinnamon rolls.

You can usually find brioche buns at the grocery.

This is what you need for the ice cream sandwiches:

How To Make An Ice Cream Sandwich On A Brioche Bun

The ice cream has a traditional custard base with heavy cream, milk, sugar and egg yolks. It comes together pretty quickly, so it’s important to have everything in the right bowl or saucepan before you start.

First, I whisk the egg yolks in a medium bowl. Then I pour a cup of the heavy cream into a separate large bowl.

Next, I warm the remaining heavy cream, whole milk and granulated sugar in a saucepan on the stove, stirring until its warm and the sugar has dissolved.

After that, I pour about half the warmed cream-milk-sugar mixture into the egg yolks, whisking constantly. Then I pour it back into the saucepan.

Ice cream can get tricky when you are tempering the egg yolks like this, but after you do it once, it won’t seem like such a big deal.

With the custard over the heat, I am constantly stirring until it thickens enough to coat the back of the spoon.

Then I pour the custard through a fine mesh strainer into the bowl of heavy cream. This will catch any cooked egg bits that might have appeared.

I still refrigerate the custard to make sure it’s cold enough for my ice cream maker.

During this chilling time, I toast the almonds in the oven and finely chop them.

After churning the ice cream, I stir in the almonds, transfer the ice cream to a container and give it time to fully freeze.

You want the brioche to be soft and fluffy, so you can’t put them together and freeze them.

But of course, I do recommend making the ice cream in advance. Then you can buy brioche rolls at their freshest for this special dessert.

How To Make Easy Ice Cream Sandwiches On A Brioche Bun

Even though I adore this homemade almond ice cream, I know making ice cream from scratch isn’t for everyone. Also, an ice cream maker is a more niche small appliance for your kitchen.

You absolutely can use store-bought ice cream to go with those store-bought brioche buns. If you go that route, I encourage you to try out different flavors. Chocolate, salted caramel and butter pecan are three of my favorites.

Instead of the usual cookies, these brioche ice cream sandwiches pair a store-bought brioche bun with a scoop of homemade toasted almond ice cream.

You can make the ice cream in advance, but assemble the ice cream sandwiches to order rather than making them and freezing them because the brioche won’t be soft. 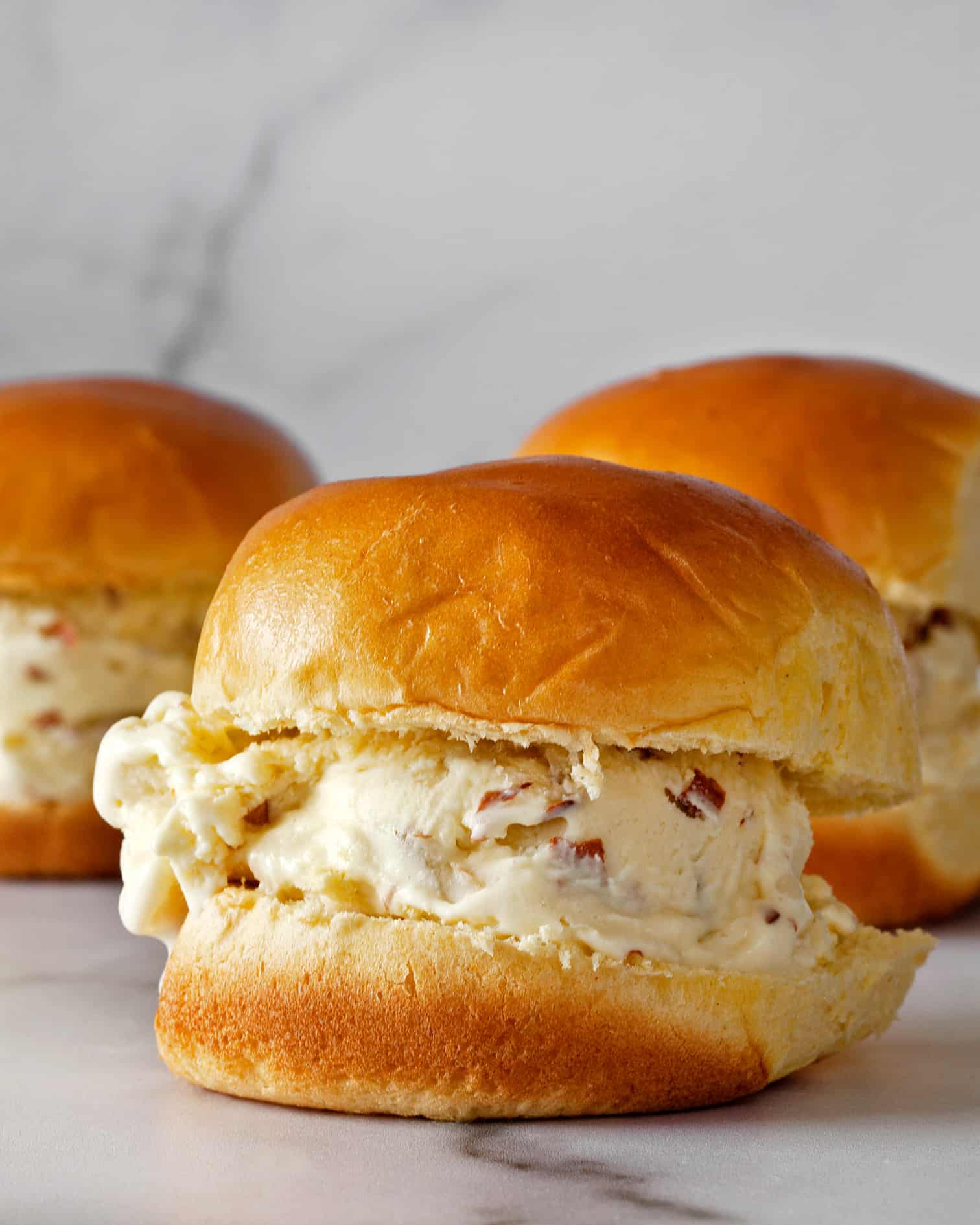