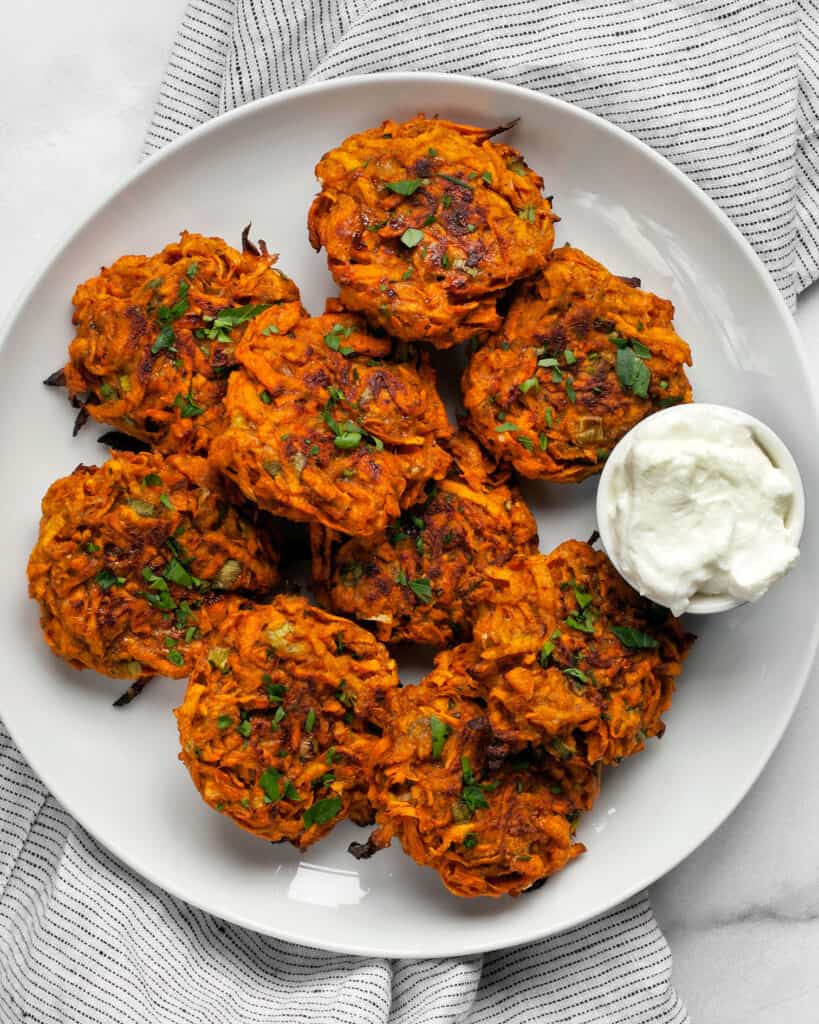 These healthier sweet potato fritters bake in the oven instead of being fried. They are a little spicy, seasoned with cumin and chili powder.
Jump to Recipe

These easy sweet potato fritters are baked in the oven and not fried. That makes them tasty and healthy. They’re seasoned with dried spices including chili powder and cumin, so they have some heat. Serve them as an appetizer, in a salad or with cooked grains.

Why You’ll Love These Baked Fritters

They are healthier than typical fritters. Because they are baked and not fried, they’re much lower in cholesterol, trans fat and saturated fat.

And since they aren’t fried, they are easier to make and less messy. Whether it’s a vat of vegetable oil to deep fry or a shallow amount to pan fry, baking just involves a pan greased with non-stick cooking spray. Also, baking is more consistent and it requires less effort.

The fritters have only 10 ingredients (not including the yogurt and fresh herbs for serving). The grated sweet potato is seasoned with spices that you might already have in your pantry.

They are more than an appetizer. You can also serve these fritters as a side dish or include them in a salad to turn them into a main dish.

Sweet or savory, fritters are a mix of ingredients, usually 1 or 2 main ones with batter that are formed into patties and deep fried. They can be apple fritters dusted in powdered sugar that you see at donut shops. There are banana fritters too for something sweet. On the savory side potato latkes and even crab cakes can be considered types of fritters.

Do You Have to Fry Fritters?

I know there will be fritter purists out there who won’t call something a fritter unless it’s fried in oil. But always a fan of a sheet pan in the oven, I make this much healthier version that’s baked. While they won’t completely brown like they would if they were fried, the sides of these sweet potato fritters that do make contact with the pan will crisp up.

How To Shred Sweet Potatoes

When I used to make these fritters, I would pull out my spiralizer to cut the potatoes. As beautiful as they looked that way, I now use my box grater, so there is less to clean up. All you have to do is to peel the sweet potatoes and run them over the largest holes of the grater. Then take a towel to gently squeeze them to remove some of the moisture. They won’t have as much liquid as zucchini, so don’t expect there to be too much to pat off.

And yes, you can shred the potatoes in a food processor using the grating disc.

1. Shred the sweet potatoes using a box grater. Towel off the excess moisture.

2. Combine the potatoes, scallions, spices and flour in a large mixing bowl.

3. Carefully stir the ingredients together.

4. Stir in the egg. Make sure that it is evenly distributed throughout the batter.

5. Scoop the fitters and shape them into patties. You don’t need to press them too hard. Just make sure that you use enough pressure so they stay together. It’s ok if the edges are uneven.

6. Arrange the fritters on the sheet pan and bake them for 25-30 minutes until they are golden brown. Flip them over a little over halfway through baking. Sprinkle the fritters with chopped parsley and serve them with yogurt.

As mentioned, you can serve these fritters as an appetizer with Greek yogurt for a dipping sauce, which will balance out the spices. Another option that takes inspiration from my Baked Falafel Salad is to make a kale or spinach salad and top it with the fritters. It is similar to this Roasted Sweet Potato Chickpea Salad.

You can keep the fritters in an airtight container in the fridge up to 3 days. Or freeze them for 1 month. Eat them cold or warm them in a 350-degree F oven. They will likely lose some of their crisp outsides when you reheat leftovers. Always let the fritters them cool to room temperature before storing them.

Can you make this fritter recipe gluten free?

Yes, you can substitute rice flour for the all-purpose flour, so the fritters are gluten free.

Can you use another type of potato besides sweet potatoes?

You can swap out the sweet potatoes and use Yukon Gold potatoes instead.

What dipping sauces are good with sweet potato fritters?

Did you make these healthier fritters? Please leave a rating and comment below. Thanks!

These healthier sweet potato fritters bake in the oven instead of being fried. They are a little spicy, seasoned with cumin and chili powder.

To make the fritters gluten free, use rice flour instead of all-purpose flour.

You can substitute the yogurt and use sour cream.

You can also garnish them with other fresh herbs such as cilantro and chives.

Let the fritters cool before storing leftovers in an airtight container in the refrigerator up to 3 days. They also can be frozen up to 1 month. Warm them in a 350-degree F oven. Leftovers can be eaten cold or warm. 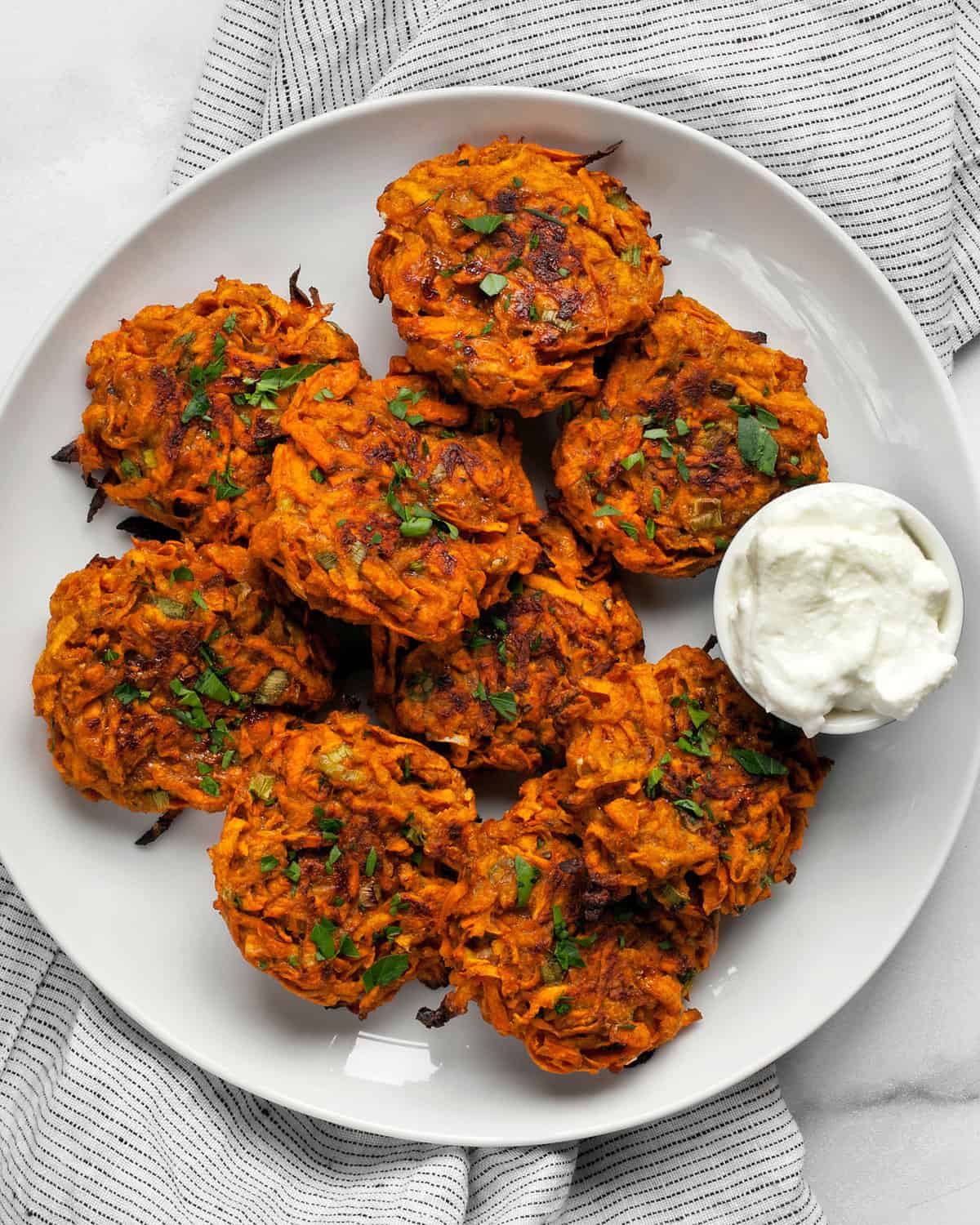